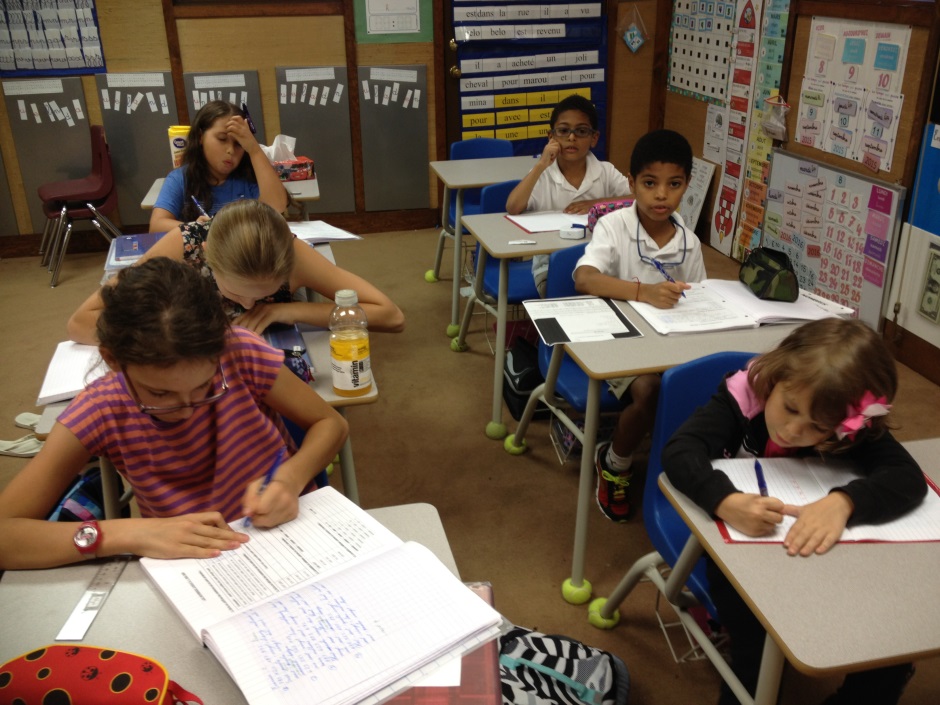 Throughout the Elementary program, students are exposed to a ‘third’ language, Arabic and/or Spanish.

The Third Language Track is optional, four times a week.

As part of the Middle School program, students have the option to take a modern language as their official third language starting Grade 6 or 7. Students must make a carefully planned choice to study one of two languages: Spanish or Arabic starting Grade 1. Students cannot switch from one language track to another during their elementary and middle school years. However, a student can drop out of the Third Language Track, as it is an optional course.

Students will study the same language through Grades Six, Seven, and Eight. Modern language courses prepare students for continued study of the language in high school, and lay a strong foundation for future advancement and learning of modern languages.

In addition of Modern Languages, Latin may be offered depending on the school year.

Reading Arabic – “Hard for the Brain”. Recent findings in neuropsychology have labeled Arabic as one of the most difficult language to learn. While most of the modern languages use both sides of the brain, a specific involvement of the left hemisphere is seen to learn Arabic. The left side of the brain is better at distinguishing details. It is the ability to tell the letters apart that seems to work differently in Arabic- because telling the characters apart involves looking at very small details such as placement of the dots. Based on our past experience, children starting learning Arabic at an early age allows our students to develop an important Arabic phonetic awareness (before the learning of the sounds becomes difficult) along with reading and writing skills. Starting first grade, students are offered the option to take Arabic. Arabic is part of the school optional language track starting Grade 1 to Grade 8.

Spanish classes may be offered depending on the families demand and the teacher’s availability. Spanish classes  levels focus on conversational skills along with phonetic awareness, reading and vocabulary. Weekly themes are included in the courses.

Spanish classes are part of the optional Third Language track, from Grade 1 to Grade 8.