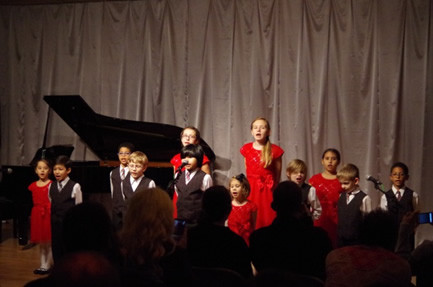 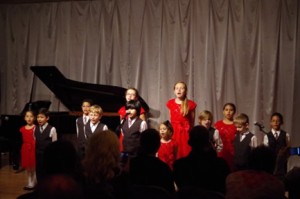 Ecole Jean-Jacques Rousseau Christmas performance was a great way to celebrate for the holiday season, once again, the impact of performing arts, music and the string program has had on the student’s self-discipline, dexterity, coordination, self-esteem, thinking skills, listening skills, creative abilities and personal expression. The performance demonstrated the wonderful work of the teachers, the parents and the students of Ecole Jean-Jacques Rousseau. It was a musical, energetic and inspiring performance.

In addition to participating in the performing arts program this year, our preschool class sang by themselves, and presented two French songs led by their French teacher, Madame François.

Our Voice teacher, Matthew Campbell, accompanied the students at the piano for a wonderful version of Jingle bells, along with the performance of the voice students in an American song “Jewerly Box” by the group January May.

Ecole Jean-Jacques Rousseau violin performance showed the impact of the Suzuki Method has had on our school string music program. Mrs. Kyra McCarty led the String Ensemble through another wonderful performance/demonstration. From a Twinkle Variation, through French Folk song to Minuet 1 (J.S Bach), the students performed in solo and ensemble pieces.

Congratulations to the teachers and the students for another wonderful performance!